In 2017, for the first time ever, Ukraine will become a net importer of the metal scrap. Collection of this raw material in Ukraine will amount to 2.9 – 3.1 million tons (excluding the entry into the market by Ukrzaliznytsya), while the scrap price is not going to get lower than the export parity price in Turkey. These are the data stated in Interpipe forecasts on the metal scrap market in 2017.

The situation with the scrap collection will get even tougher this year. According to the forecasts, made by Interpipe, Ukraine will collect 2.9 – 3.1 million tons of scrap in 2017. This amount is even lower than the volume of actual deliveries to the Ukrainian metallurgy mills in 2016, amounting to 3.2 million tons. Besides, it is also considerably lower than the demand for 2017, which, in accordance with the data from Ukrmetallurgprom Union of Enterprises, amounts to 4 million tons. Therefore, the expected shortage of scrap in the country in 2017 will be approximately 1 million tons. 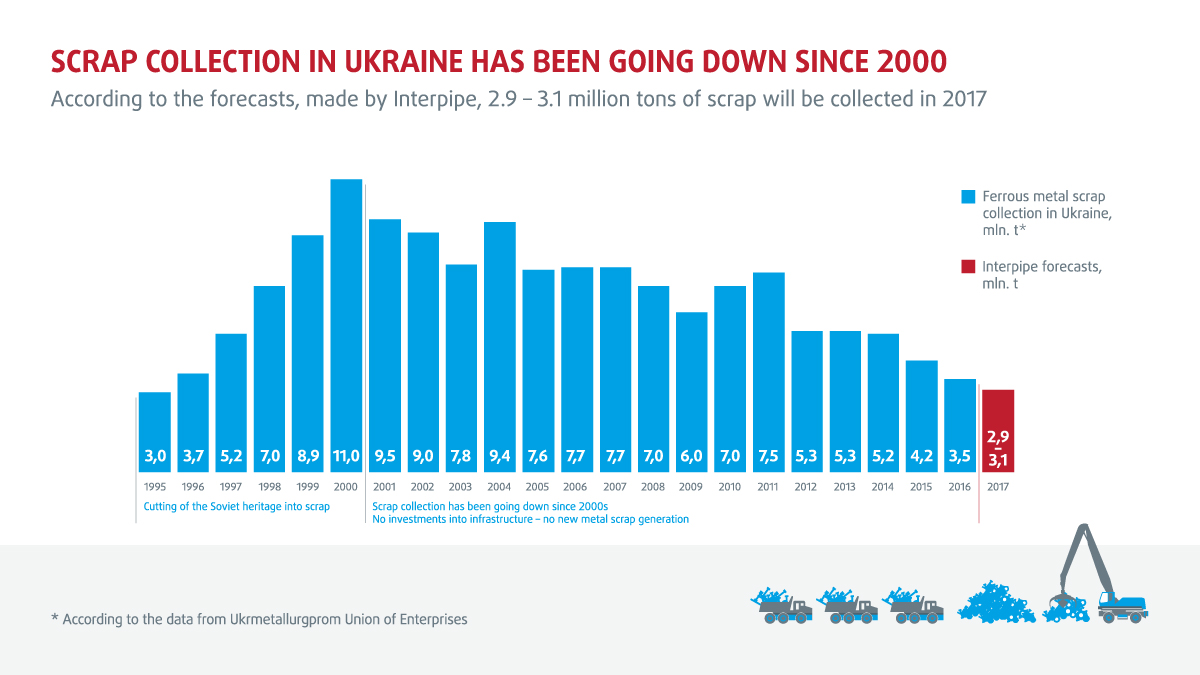 The major factor for such decline in collection consists in the fact that sources for available raw materials are gradually running dry in the country. According to the data from CRU Independent Authority agency, metal consumption at the internal market, as compared with the Soviet times, has gone down by 95%, which means there is virtually no generation of some new metal scrap. The national statistics on the metal scrap collection does confirm this forecast. For instance, in 2000 Ukraine collected 11 million tons of scrap, in 2010 – 7 million tons, while in 2016 – only 3.5 million tons. 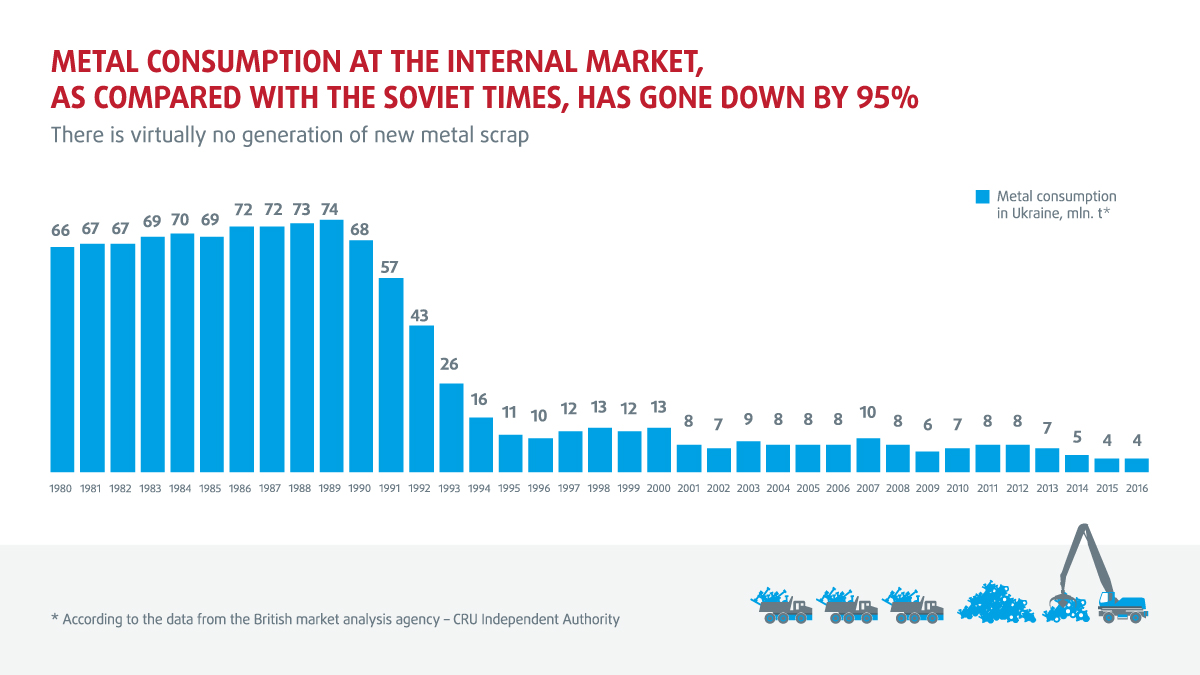 This year Ukraine will turn into a net importer of the metal scrap, meaning that scrap imports will exceed exports. Metallurgy companies, which have already built up their imports of the hot-briquetted iron and increased their cast iron consumption, will be now forced to import metal scrap as well. Trial deliveries of this raw material were launched by major scrap consumers at the end of 2016.

According to the forecasts, made by Interpipe, metal scrap prices in Ukraine in 2017 will be higher than the export parity price in Turkey, excluding short-term periods of peak demands in this country. Finding themselves under such circumstances, metallurgy companies will be forced to compete for scrap procurement not with exporters of this raw material, but between themselves, and such competition will become the principal factor, rendering influence upon the scrap price. We have already seen a situation of this kind: during 8 months out of 12 in 2016 Ukrainian metallurgy facilities had to pay for the scrap more than the rebased Turkish price. In September – December 2016 the excess in the national market prices for the scrap over the rebased Turkish ones was 35 USD per ton (or 28%) at the average. 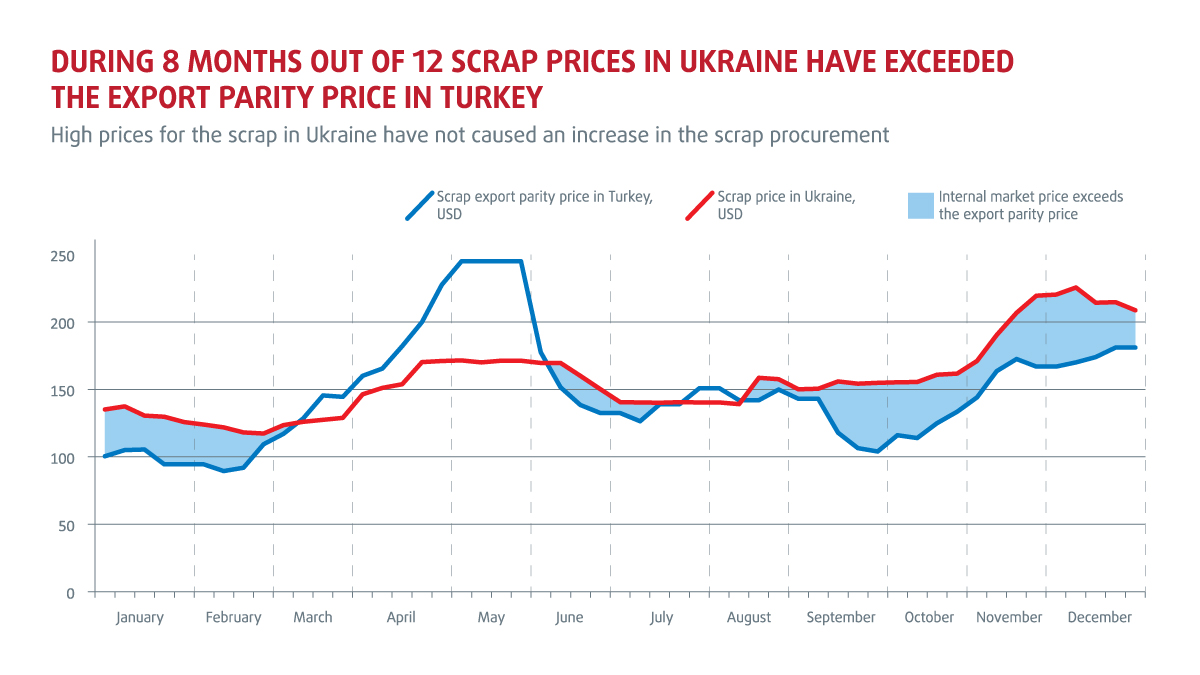 Development of the situation with the export duty for the scrap will become a major event of 2017 from the statutory regulation point of view. At present its rate is 30 Euro per ton. The twelvemonth period of its validity will be over in September 2017, and after that it will go back to 10 Euro per ton. Metallurgy companies will advocate the prolongation of the 30 Euro duty validity. The second anticipated event consists in the adoption of norms to bring the scrap collection market out of the shadow economy.
Special attention should be paid to the influence of Ukrzaliznytsya upon the metal scrap market. Calculations, made on the basis of Ukrzaliznytsya data, show that this State Company has a stock of scrap, amounting to 400 – 450 thousand tons and exceeding the monthly consumption rates in Ukraine. That is why there are no doubts that appearance of this volume at the market would have a significant impact on the provision of these raw materials to metallurgy facilities.
“We are entering a period, when there will be less and less scrap, while the demand for it is going to get higher and higher. Nowadays we do have that moment, when it is time for the Government to establish its position on the economic model: either to promote manufacturing of finished products in Ukraine, or to become a raw material exporter”, Denis Morozov, Interpipe Chief Financial Officer, has commented. “Export duty reduction and, consequently, the rise in the metal scrap prices at the national market, will result in the aggravation of the Ukrainian metallurgy companies’ positions at the export markets. Potential losses of our business, subject to the aforementioned export duty drop, amount to 100 thousand tons of orders for finished products in 2017”.
The list of potential factors to increase the scrap generation includes, first, a rise in the production figures for the mechanical engineering industry and, second, large-scale projects, related to the railway rolling stock and pipeline infrastructure upgrade and modernization of the housing and communal services sector. Interpipe do not expect any rapid growth in these areas, and that is why, according to the corporate forecasts, scrap collection figures will continue dropping in the next five years.

About the company:
Interpipe is global producer of steel pipes and railway wheels, based in Ukraine. The company’s products are marketed in more than 80 countries around the world through a network of sales offices located in key markets of Ukraine, the CIS, the Middle East, North America, and Europe. In 2016 Interpipe supplied 572,000 tons of pipe and wheel products. The company’s workforce makes up 11,500 employees.