During 2018 Ukrainian industrial company Interpipe increased pipe and railway products sales in tones by 11.7 percent. The growth was observed in all types of products and in all key markets. Total sales volumes reached 857 kt; it is the best result over the last five years. Export share in sales is 72 percent while share of Ukrainian market grew up from 25 to 28 percent.

Pipe deliveries to the Ukrainian customers grew by 22 percent YoY to 179 kt.

Such growth was spurred by boosting of drilling operations in Ukrainian gas fields as well as due to production intensifying of JSC “UkrGasVydobuvannya”, including implementation of Strategy 20/20 activities. This allowed to boost OCTG sales by 15 percent, involving supplies of pipes with UPJ-M premium threaded connection earlier certified in accordance with CAL IV.

In 2018 for the first time in nearly half a century the U.S. bypassed Saudi Arabia and Russia as the leader in average daily oil production. Moreover, the American market is traditionally the largest one in the world by the number of new wells drilled. Because of persistent growth of oil production Interpipe highlighted the maximum result in the American region since 2013. In total, 124 kt of line and threaded pipes were supplied to customers in North and South America in 2018 (+37 percent YoY).

Another growth area in 2018 became Europe where tubular goods demand rose almost in all industries. Interpipe delivered 169 kt of seamless and welded pipes to its European customers (+24 percent YoY). Through Vallourec Niko Tube joint venture project Interpipe intends to strengthen its positions on this high-margin market.

In the Middle East Interpipe maintained its sales at the level of 83 kt; the main bulk of deliveries supplied to key customers – large-scale distributors in the UAE, Saudi Arabia, Turkey and Egypt. Among the most important projects line pipe shipments for the Riyadh Metro should be emphasized as well as the first deliveries of casing for oil projects in the UAE.

At the same time CIS sales last year went down by 19 percent YoY to 113 kt due to excessive politicization of the Customs Union market alongside with imposed customs and antidumping levies amidst ruble's depreciation. However, that was partially offset by the increased shipments to Uzbekistan and Azerbaijan, including pipes with UPJ premium connections. 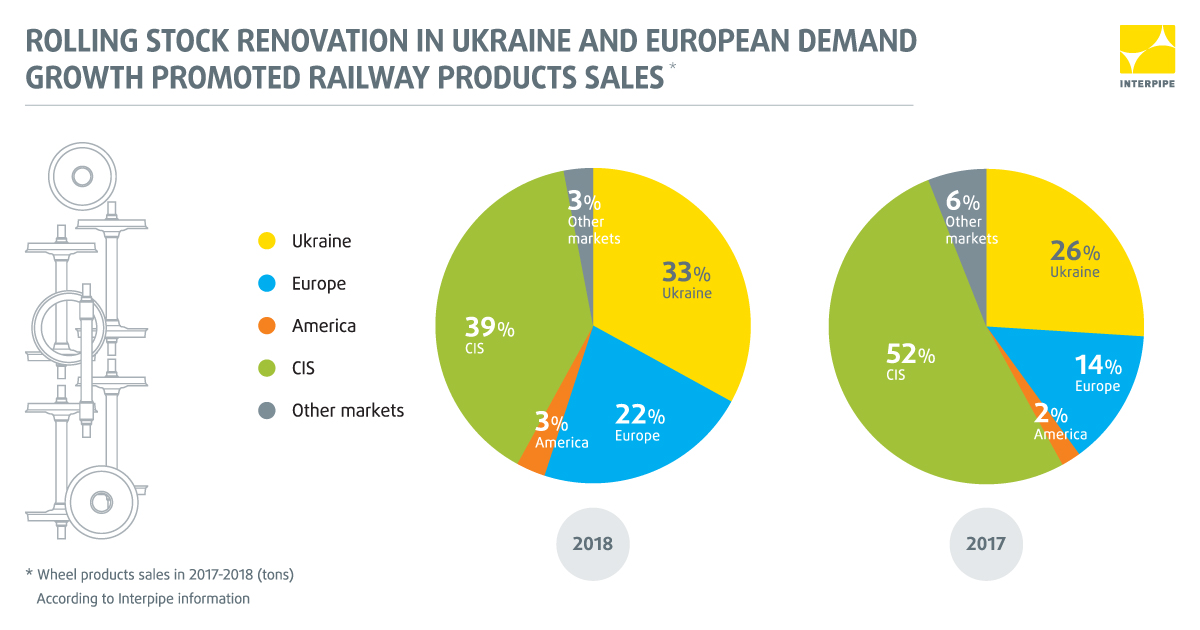 The main driver of the demand for railway products in Ukraine became PJSC “Ukrzaliznytsya” rolling stock renewal acceleration as freight operator received in 2018 the maximum number of freight cars over the past 25 years. So, as the cycle of high demand for freight car wheels in Ukraine goes on Interpipe boosted up its sales on the domestic market by 39 percent YoY up to 62 kt. Almost a half of this volume supplied to “Ukrzaliznytsya”. Nevertheless, in absolute figures, Ukrainian sales are still far from the previous years ones. For example, in 2011-2012 the domestic market consumed approximately 130 kt of wheels per year.

Meanwhile, CIS sales decreased to 74 kt versus 89 kt in 2017. Deliveries were negatively affected by the increase of anti-dumping duty to 34.22% in April provided by the Eurasian Economic Commission. In order to counteract declining Interpipe reallocates its sales to the prospective markets, such as Europe, U.S. and the Middle East, especially regarding the growth cycle of the Russian car-building and car-maintenance markets is going to erode in late 2019.

At the same time EU railway products supplies continued to grow in 2018 attaining new maximum. Sales volumes to the European customers surged up to 41 kt (+76 percent YoY). Interpipe became the leader of the freight car wheels market, significantly increased wheelsets deliveries and intends to enter the EU passenger wheel market. That was achieved due to the previously commissioned capacities for wheel machining and performing special finishing operations.

The output of round steel billets in 2018 amounted to 973.8 kt, 15 percent higher YoY. Alongside with order increase the key growth factor was the extension and increase of export duty on scrap metal up to EUR 42 per tonne. Almost all steel volumes were sent to Interpipe plants, and only 19 kt of billets were shipped to third-party consumers (-17 percent YoY).

Fadi Hraibi, Interpipe CEO:
The start of 2018 was not easy, but in the end this year turned out to be quite successful for Interpipe. We managed to benefit from the growing demand in all main sales areas.

In the coming year Interpipe is going to persist its strategy to increase the share of high-margin, technically sophisticated products, e.g. pipes with premium threads, wheelsets, machined wheels and finished axles. This is priority goal of our Investment Program, R&D and commercial activities. Meanwhile, the main risks come from trade barriers as already imposed as expected to be introduced on the majority of export markets. The list of potential derailers also includes low rates of scrap metal collection in Ukraine as well as a shortage of the qualified production personnel.

About Interpipe:
Interpipe is global producer of seamless pipes and railway wheels, based in Ukraine. The Company’s products are marketed in more than 80 countries all around the world via the network of sales offices located in key markets of Ukraine, Europe, North America and the Middle East. In 2018 Interpipe supplied 857 kt of finished goods, including 189 kt of railway products.