Interpipe decreased sales of pipe and railway products in 2020

The Ukrainian industrial company Interpipe decreased its sales of pipe and railway products in tons by 17% y-o-y in 2020. Total sales amounted to 662.4 kt. Export share in sales was 81% while share of the Ukrainian market went down from 24% to 19%. 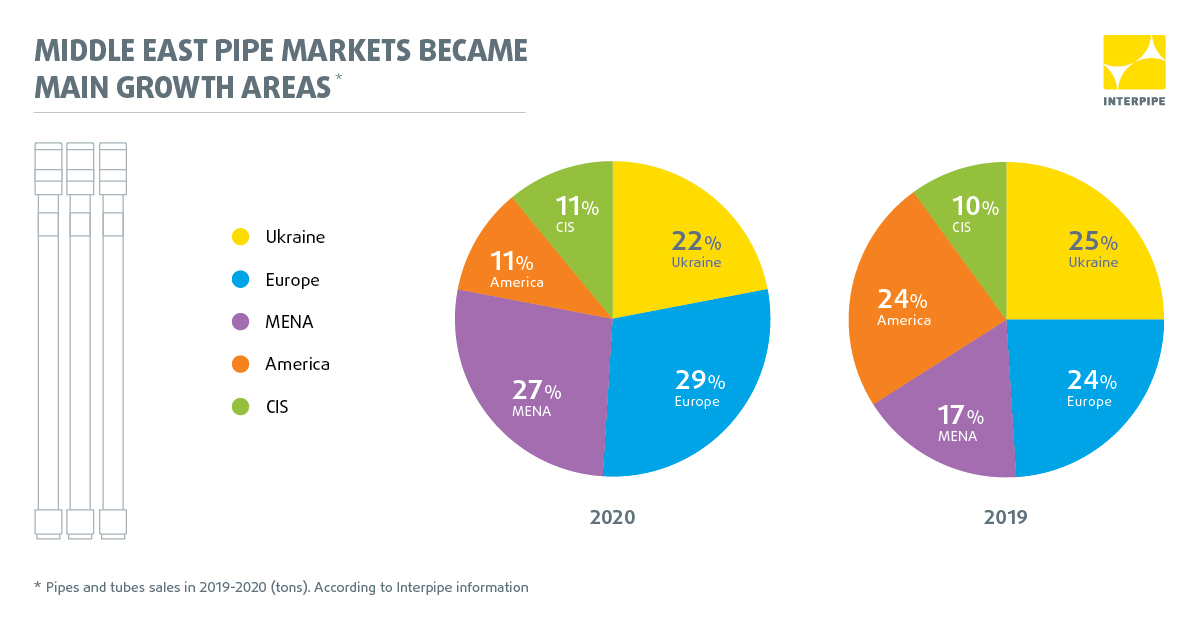 Sales of pipe products decreased by 21% y-o-y and amounted to 469.9 kt as a result of a drop in the demand for OCTG pipes. The main factor was the decline in oil prices in the 1st half of 2020.

Pipe deliveries to the Ukrainian market were reduced by 31% y-o-y and amounted to 102 kt. The main factor here was the curtailment of the gas production program by UkrGasVydobuvannya. In 2020, UGV cut fourfold its drilling program of new wells. At the same time, shipments to private gas production companies remained approximately at the level of 2019.

Similar trends were observed in the United States. Due to the falling oil prices many oil companies at the US market went bankrupt dropping the demand for OCTG. Moreover, at the US market, Ukrainian pipe products were subject to an aggregate duty of 32.5%. As a result, the sales of Interpipe tubular goods in North and South Americas decreased by 63% y-o-y – to 52 kt.

Interpipe supplied 137 kt of pipes to its European customers (-6% versus the figures of 2019). The downturn in sales was caused mainly by the coronavirus pandemic, which led to a slowdown in the consumption of the tubular goods. In addition, the European market has been limited by import quotas, which do not take into account the capacities of the JV Vallourec Niko Tube.

At the same time, Interpipe increased its sales in the Middle East by 9% y-o-y, to 111 kt, due to the start of sales of UPJ-F premium connection to Turkey and line pipes to such leading oil-producing giants as the National Oil Company of Abu Dhabi (ADNOC) and Qatar Petroleum. 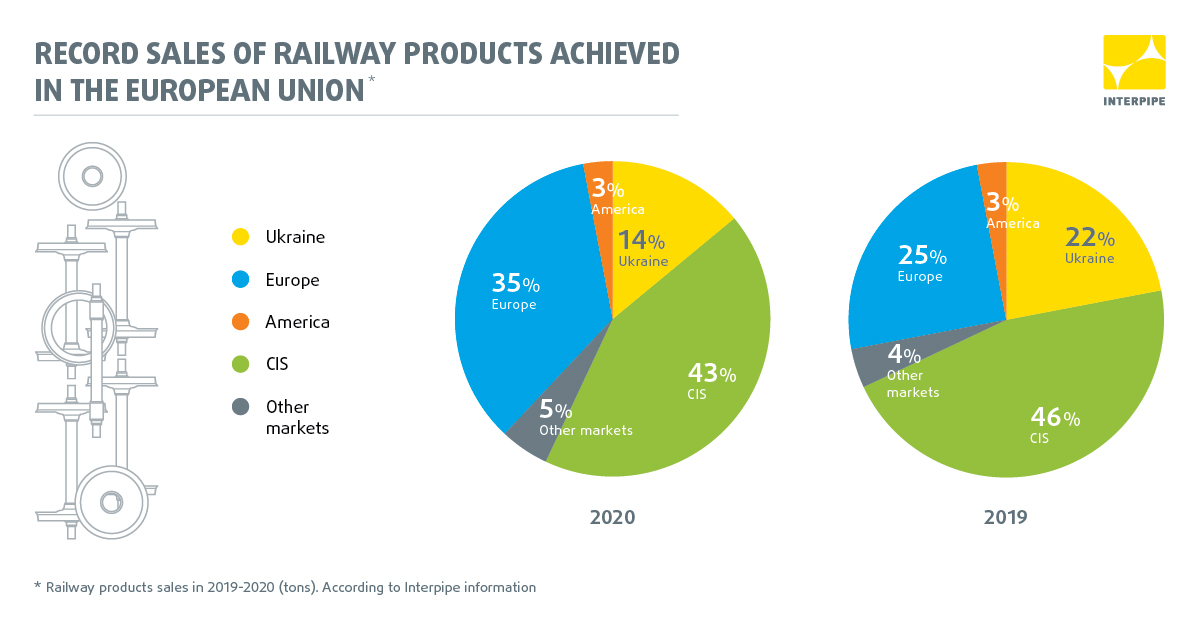 Sales to the markets of the CIS countries in 2020 decreased by 10% y-o-y, to 84 kt, after the return of the duty on the deliveries of Ukrainian wheels to the Customs Union and a reduction in cargo transportation during the coronavirus pandemic period. In Ukraine, there was also a decline in the consumption of railway products due to the crisis in the domestic railcar-building industry. As a result, Interpipe decreased its sales to railcar manufacturers and maintenance enterprises by 42% y-o-y – to 26 kt.

At the same time, the sales of railway products to the European market in 2020 reached another maximum, amounting to 67 kt (+ 29%y-o-y). These indicators were achieved by increasing the manufacture of new products for freight transport, as well as entering the segment of wheels for the passenger railway transport – in particular, for high-speed trains of the national German operator Deutsche Bahn.

Volumes of round steel billets’ production at Interpipe Steel in 2020 amounted to 758.7 kt, which was 11% lower than the results of 2019. The drop is caused by the decline in the demand for finished products.

Denis Morozov, Interpipe Chief Financial Officer:
The share of Interpipe sales to export markets exceeded 80% according to the results of the year. We entered new segments and accomplished a number of deliveries to market leaders. The Pipe Division successfully shipped products with premium threaded connections to Turkish Petroleum and line pipes to ADNOC (Abu Dhabi National Oil Company) and Qatar Petroleum. The Railway Product Division completed certification and carried out the first deliveries of passenger railway wheels for Deutsche Bahn high-speed trains.

As an exporting company, we had seen the intensification of protectionism at the key markets throughout the year. The pandemic strengthened the desire of other states to provide orders primarily to their producers with the help of quota tightening and introduction of anti-dumping duties and other instruments aimed against importers. On the other hand, within Ukraine, Interpipe was under pressure from high electricity prices. Consumption and prices for key energy resources in the world – oil, natural gas, and coal – were falling, while in Ukraine tariffs for electricity for the industry were growing.

Our Company will continue to grow by investing in the expansion of capacities for export markets. In 2021, we also plan to complete the construction of an additional workshop for the manufacture of wheelsets and to start the construction of new facilities to produce pipes with premium threaded connections for oil and gas extraction.

About Interpipe:
Interpipe is a Ukrainian industrial company, a producer of seamless pipes and railway wheels. Company’s products are marketed in more than 80 countries all around the world via the network of sales offices, located at the key markets of the CIS, Middle East, North America, and Europe. In 2020, Interpipe sold 662 kt of finished goods, including 192 kt of railway products. The latter are marketed under the KLW brand.