Interpipe has announced production results of 2016. The sales of company’s finished products decreased by 5%, as compared with 2015, amounting to 572 thousand tons. Such reduction included a 10% loss in pipe supplies and a 22% growth in wheel sales. The share of exports in the overall sales structure reached 75%. 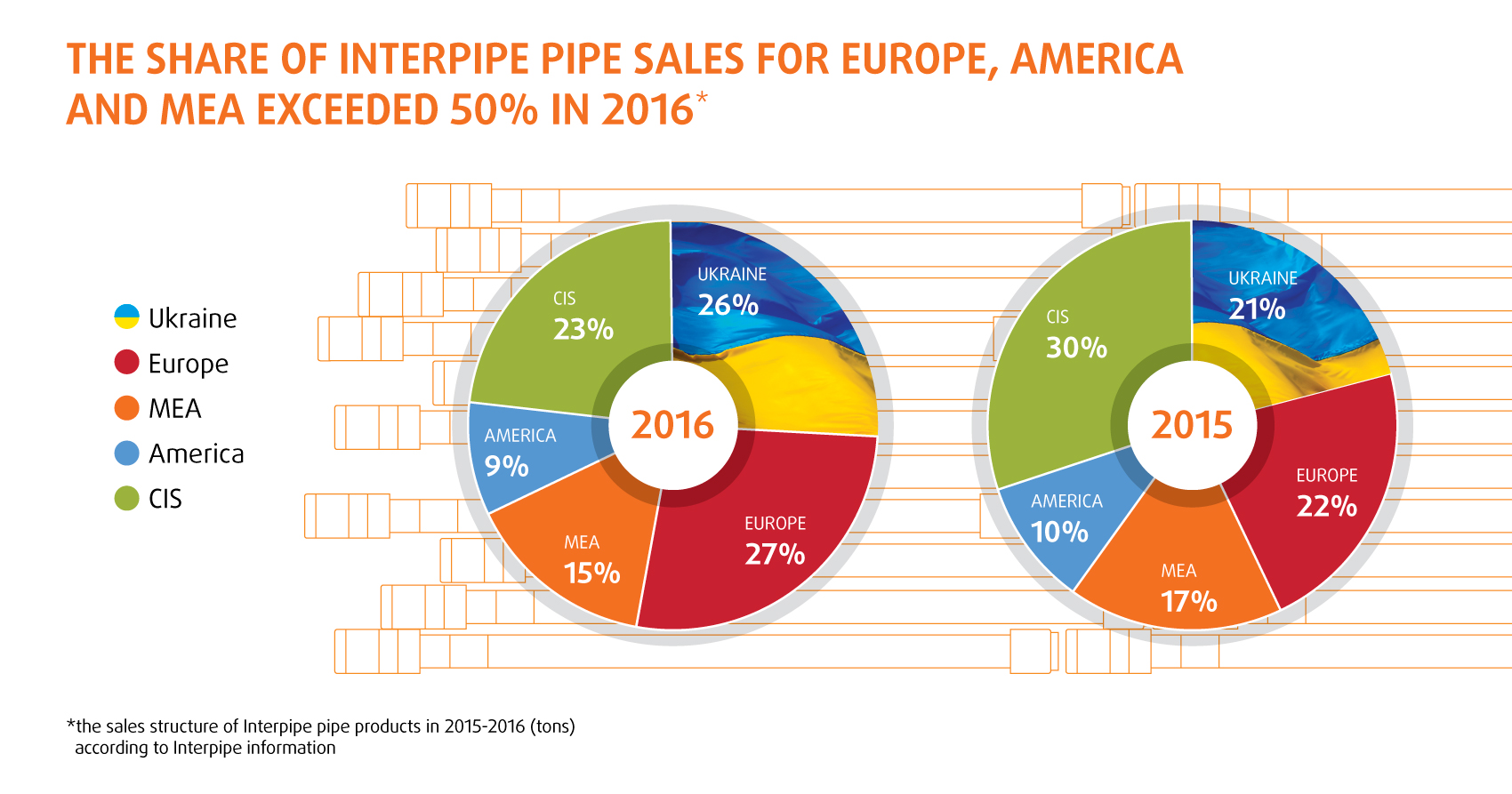 The sales of pipes in the European market grew from 111 thousand tons in 2015 to 124 thousand tons last year. American market sales results remained at the level of the preceding year. Sales in the Middle East decreased to 69 thousand tons from 85 thousand tons a year earlier due to the losses at the markets of Turkey, Egypt, and Iraq. A number of internal difficulties in these countries had a significant impact on the company’s results in this region.

The pipe sales in the CIS dropped from 153 thousand tons in 2015 to 104 thousand tons last year under the influence of several unfavorable external factors, including the introduction of a customs duty in connection with suspension of validity of the Free Trade Area Agreement with Russian Federation and unstable political and economic climate in the Central Asia countries.

Based on the results of 2016, the cumulative share of pipe sales in the three top-priority export markets (Europe, America, and MEA) exceeded 50% for the first time. 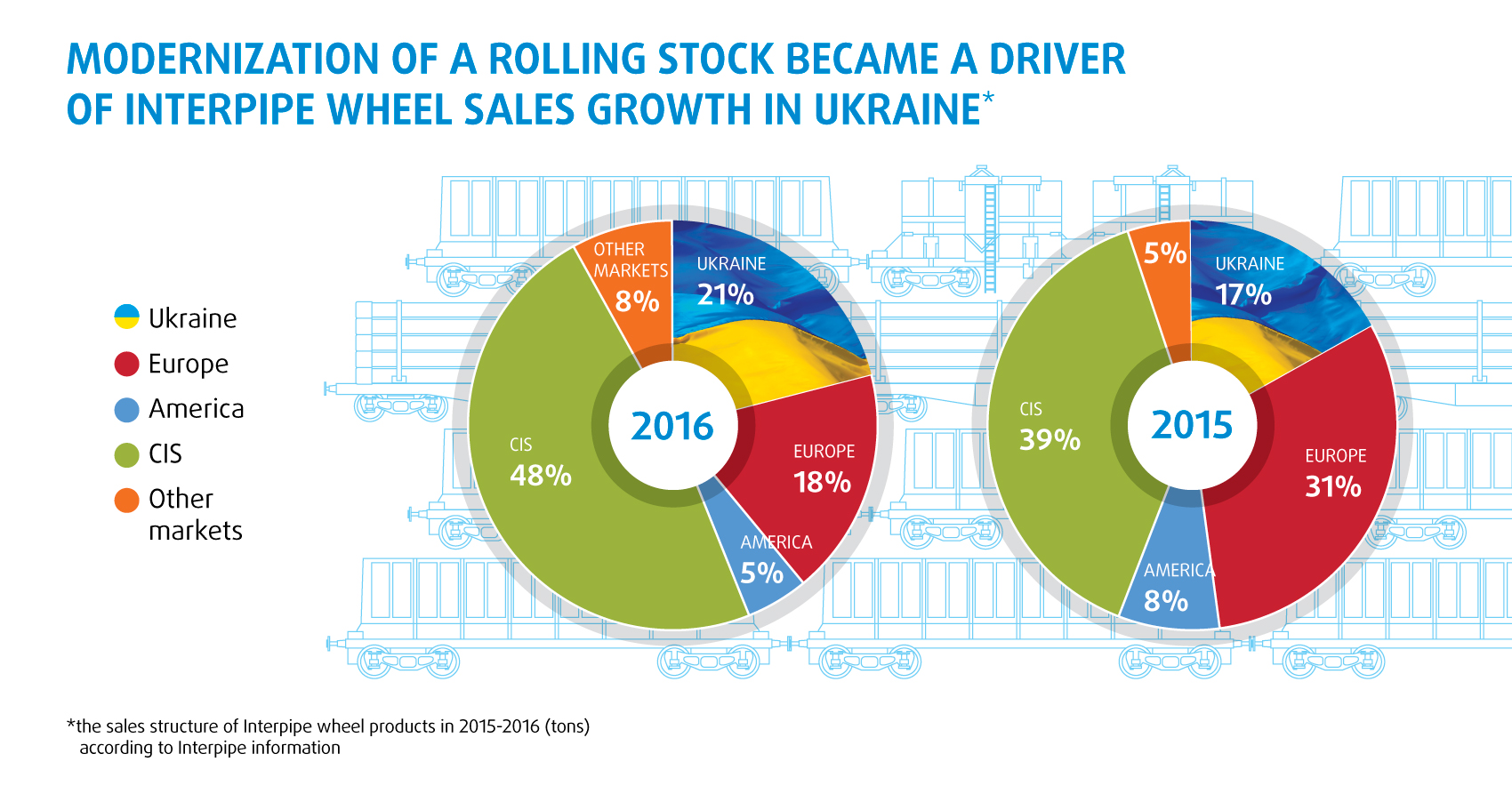 The sales of wheel products in 2016 were increased by 22%, amounting to 114 thousand tons. The internal market became the point of growth, while the modernization of the Ukrzaliznytsia rolling stock was the principal factor of such increase. In the second half of 2016 Ukrzaliznytsia provided a number of orders to Ukrainian railcar-building companies and wagon repair plants, ensuring a revival of the internal market. Railway wheel sales in Ukraine rose from 16 thousand tons in 2015 to 24 thousand tons last year. Sales level in the CIS countries grew up as well.

The reduction of the wheel sales share in Europe to 18% in 2016, as compared with 31% in 2015, was conditioned by the changes in the product mix. Over the course of the year the company has systematically reduced the share of the low-margin products (rough-machined wheels) in this market, building up the sales of technologically complicated goods (finish-machined wheels and axles).
Production volumes for round steel billets at Interpipe Steel rose marginally, as compared with 2015, totaling 614 thousand tons. Sales of billets to external consumers amounted to 40 thousand tons.

Interpipe Steel deficit of the major raw material (metal scrap) in 2016 amounted 43 thousand tons. The lack of scrap provoked a considerable growth of its prices in Ukraine, resulting in the rise of the self-cost for both steel and finished products. Consequently, in the second half of the year the company was forced to stop the billet sales to its external customers and lost a series of orders for finished products.

Nevertheless, in 2016 Interpipe continued to invest into the facilities’ equipment and development of new products. The pipe production business ensured the mastering of premium gas-tight connections, pup joints for the oil production industry, and super thin-walled pipes for the European market. The company’s wheel business enhanced its capacities for wheel finish machining, mastered the production of finish-machined axles and wheels for the high-speed rail, and commissioned the in-house assembly of wheelsets.

“Ukrainian exporters experience significant influence of the country-wise factors: the cost of the electric power, natural gas and its transportation, as well as harbor dues and charge rates of the government monopolies here are higher than of the Russian, Chinese, and even some of our European competitors. Having a quite high production efficiency, we fall behind at the export markets due to the high cost of the raw materials and tariffs,” – noted Fadi Hraibi, Interpipe Chief Executive Officer. “Today Ukrainian business needs a reasonable industrial policy from the government, which would serve the interests of the Ukrainian manufacturers”.