In 2017 Interpipe boosted its sales and production by 35%

Interpipe, the Ukrainian industrial company, announced performance results of 2017. The company increased the sales of pipe and railway products by 35% (in tons), showing the best performance for the last three years. Interpipe reports sales growth across all product segments and regions. Total sales reached 767 thousand tons. The share of exports in the overall sales structure remained at 75%. 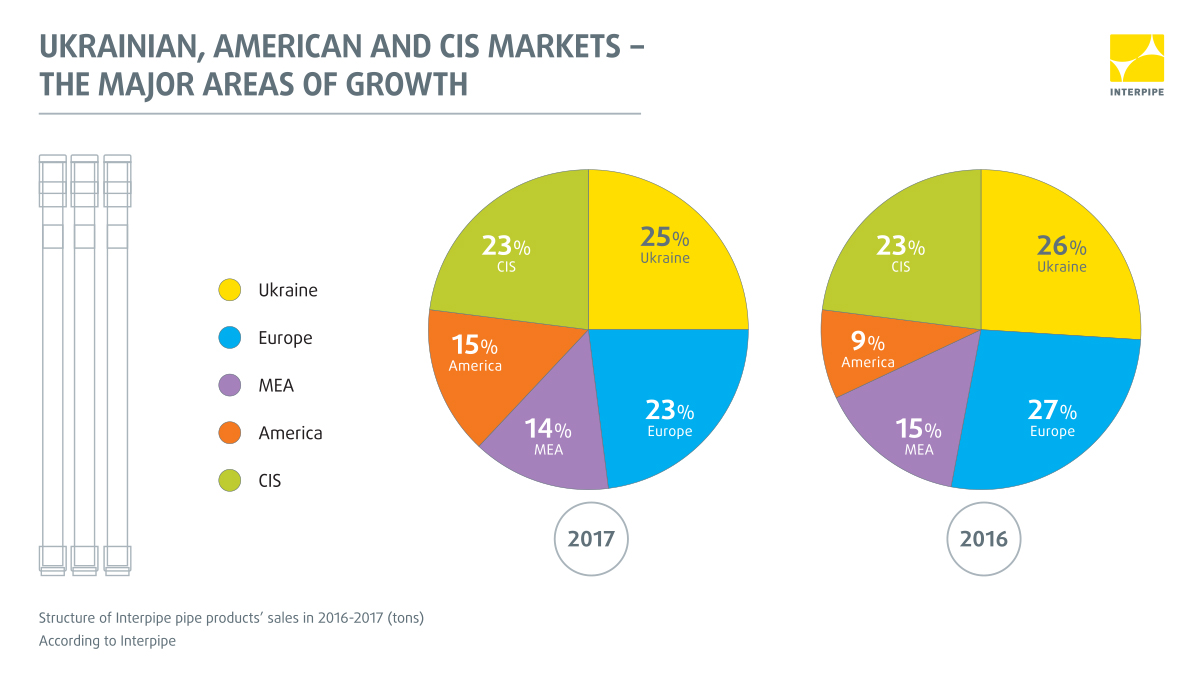 The sales of pipe products rose be 31% as compared with 2016 and amounted to 595 thousand tons. Ukrainian, American and CIS markets became the major areas of growth.

Pipe supplies to the Ukrainian market increased by 29% as compared with 2016 and reached 148 thousand tons. The enlargement of the natural gas production at Ukrainian fields, that was partly related with UkrGasVydobuvannya  20/20 Strategy, has become the major driver of growth. As a result, Interpipe OCTG sales to the domestic market increased by 2.2 times. The sales also included the launch and start of supplies of Interpipe UPJ-M premium connection that successfully passed a qualification test in accordance with ISO 13679 CAL IV in early 2018.

Due to the oil and gas production raise in the United States after the market stagnation in 2015-2016, the company managed to get back to the sales level of 2014. In total Interpipe supplied 90 thousand of OCTG and line pipes to the Americas in 2017 (in 2016 – 43 thousand tons). 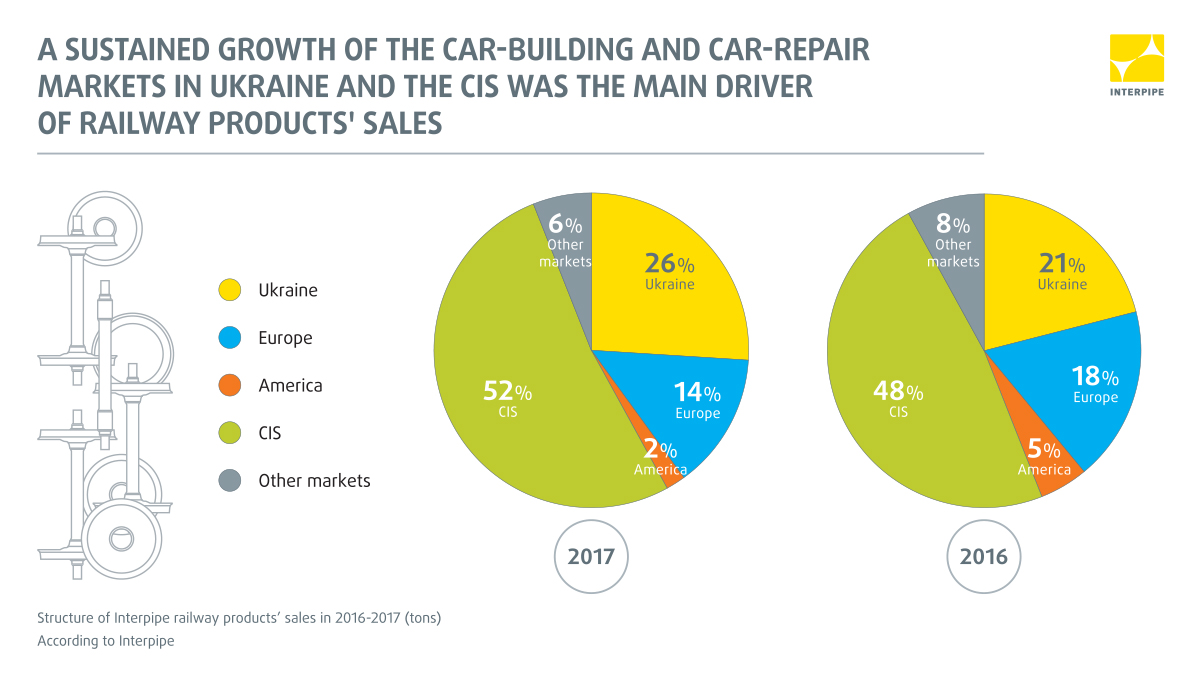 Sales of railway products, namely wheels, tires, axles, and wheelsets, in 2017 increased by 51% against 2016 and amounted to 172 thousand tons.

Modernization of the rolling stock by Ukrzaliznytsya became the major demand driver for railway products in Ukraine. A considerable growth in car repairs and the revival of the car-building allowed the company to increase its sales at the domestic market by 83%, to 45 thousand tons. Almost a half of this volume was supplied to Ukrzaliznytsya. However, sales volume in Ukraine is still far from previous years’ figures, e.g. in 2011 and 2012 the domestic market consumed approximately 130 thousand tons per year.

The CIS wagon-building and wagon-repair markets also increased due to the write-off of out-of-date wagons and growing need in repairs of the rolling stock built 5-7 years ago. Sales to the CIS countries reached 89 thousand tons against 55 thousand tons in 2016.
Railway products supplies to the European market also showed a certain growth in 2017. Due to the implementation of the strategic investment program, the company managed to substitute a major part of its deliveries of rough-machined wheels to Europe with a more technologically complicated product – finish-machined wheels. The sales volume to the European customers totaled 23 thousand tons (+11% as compared with 2016).

In 2017, Interpipe launched the serial production of wheelsets in Ukraine and carried out the first supplies to the Turkish and Iranian markets. In total, the company delivered about 1,050 wheelsets assembled at the in-house facilities.

Production volumes for round steel billets reached 850 thousand tons, which is 38% higher than in 2016. This output growth was driven by increase in the number of orders as well as effect of the scrap metal duty. Almost all steel billets amount was supplied to Interpipe mills, and only 23 thousand tons were delivered to other consumers.

The company procured 720 thousand tons of scrap for the steel production (third-party scrap, excluding Interpipe Steel internal scrap and the scrap received from Interpipe pipe mills). The raw material deficit went down, as compared with last year, to 5% of the demand (from 7% in 2016) and amounted to 42 thousand tons.

“The company showed its flexibility and seized the opportunities appeared in 2017, resulting a growth across all sales regions. We hope to keep such trend this year”, comments Fadi Hraibi, Interpipe CEO. “We are following ours way, which means continuing to invest into equipment and R&D and enhance of the operating performance. At the same time, a number of external factors, namely a metal scrap shortage, emergence of new trade barriers at export markets, oil price fluctuations, and lack of the production personnel, can have a negative impact on the business”.


Background:
Interpipe is global producer of steel pipes and railway wheels, based in Ukraine. The company’s products are marketed in more than 80 countries around the world through a network of sales offices located in key markets of Ukraine, the CIS, the Middle East, North America, and Europe. In 2017 Interpipe supplied 767,000 tons of pipe and wheel products. The company’s workforce makes up 12,000 employees.